The Difference Between Shame and Guilt Caused by Drug Addiction

One of the benefits of inpatient drug rehab is that you can focus all of your energy on recovering from your addiction, but that can make the transition a little rough for you, even though the programs try very hard to ease people into that transition. For you, that difficulty returning to daily life can be enough of an emotional obstacle to prevent you moving forward in recovery.

However, for some users, any set-back causes them to return to drug use. The big factors driving this are shame and guilt. These negative feelings can be the driving force that makes the difference between a minor backslide and a full-blown relapse.

If you are looking into inpatient rehabilitation for the first time or because a relapse has made you believe you need to resume treatment, then you are making the right choice and InpatientDrugRehabs is interested in connecting you with the resources that you need. Simply call 800-681-7369Who Answers? to speak with someone today. 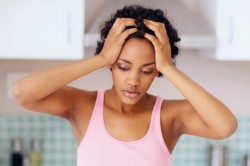 Taking part in immoral behavior in order to obtain drugs will often lead to feelings of guilt.

Everyone in the world feels shame and guilt; you know both of them well. They are common negative emotions. However, addicts tend to feel them more often than the average person. They also tend to clump them together, like they are the same emotion. They aren’t.

An archived manual from the National Institute on Drug Abuse (NIDA) clarifies that difference. “Shame refers to negative beliefs about oneself; for example, one is a weak, worthless, or deficient person. Guilt refers to the belief that one has engaged in wrongful behavior, such as stealing to obtain money for drugs.”

Unfortunately, when people are sunk into feelings of guilt and shame, they may feel so poorly about themselves that they do not believe they are worthy or deserving of recovery. Maybe you know how this feels. But, where does all of this shame come from? It can be traced back to incorrect views about addicts and addiction.

NIDA observes: “Many people do not understand why or how other people become addicted to drugs. It is often mistakenly assumed that drug abusers lack moral principles or willpower and that they could stop using drugs simply by choosing to change their behavior. In reality, drug addiction is a complex disease, and quitting takes more than good intentions or a strong will.”

Because society holds these beliefs, people struggling with addictions may be treated like they just aren’t trying hard enough, they don’t want to heal enough. You may feel that way about your addiction, but it isn’t the case.

Overtime, excessive feelings of guilt and shame will make addicts—both active and recovering—want to escape from the negative feelings. The simplest way and the most familiar is to use. Abusing a substance can cause relief from negative feelings, even if the relief is a temporary one. Basically, you end up in a downward spiral of using to alleviate the negative feelings you have about using. There is no winning.

There are a number of techniques and you should try all of them with your counsellor, therapist, or sponsor:

If you are looking to heal from a cycle of guilt and shame, contact InpatientDrugRehabs at 800-681-7369Who Answers?. It’s time to break the cycle.

Calls to numbers on a specific treatment center listing will be routed to that treatment center. Calls to any general helpline (non-facility specific 1-8XX numbers) could be forwarded to SAMHSA or a verified treatment provider. Calls are routed based on availability and geographic location.