“Many people do not understand why or how other people become addicted to drugs. It is often mistakenly assumed that drug abusers lack moral principles or willpower and that they could stop using drugs simply by choosing to change their behavior,” according to the National Institute on Drug Abuse.

This should come as no surprise to most adults; addiction has traditionally been seen as a shameful process undertaken by people lacking the will to change. Because of that, addiction has been hidden or demonized in general culture and mirrored in popular culture.

In the past, drugs meant instant death on an afternoon special or indicated a weakness or moral failing on the part of the fictional addict. But, in the last decade something has changed.

More and more television programs are taking a documentary approach to depicting the lives of addict, the lives of those close to them, and the process of recovery. If you feel like you see yourself in the addicts on those shows, it is time for you to look into inpatient drug rehabilitation, where you can get the most focused treatment. For more information, contact InpatientDrugRehabCenters.com at 800-681-7369Who Answers?. 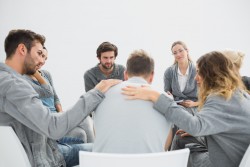 Reality TV shows such as Intervention have reduced the stigma attached to addiction and inpatient treatment.

In 2005, A&E launched the program Intervention. It was immediately a hit and A&E quickly ordered a full season of episodes. Intervention was the first program of its kind and it changed the presentation of addiction on television. It even won a 2009 Emmy for Outstanding Reality Program.

In each episode, an addict’s daily life is shown, focusing on the toll of the addiction on their life and the lives of those close to them. In the end, an interventionist is brought and family and friends directly detail why the addict needs to seek treatment. A licensed therapist recommends treatments and facilities based on the specific needs of the addict.

According to the National Institutes of Health (NIH), “Many Americans today do not yet understand why people become addicted to drugs or how remarkable scientific advances are literally redefining the arena of addiction.” Even with the diminishing stigma, people still remain largely uneducated when it comes to addiction.

Reality television, however, brings an easy to understand and entertaining lesson in addiction to the viewer. Because the shows take a medical position on addiction, it is treated like the chronic, often relapsing brain disease that it is. This helps viewers to open their minds and increases the empathy they can feel for addicts.

In addition, these programs give the audience a vocabulary for addiction. Families and loved ones can talk about their experiences and be understood by the people that they talk to because everyone is speaking the language of addiction.

Increased communication opportunities and decreased stigma are wonderful outcomes, but there are some not so wonderful ones as well.

The Success of Your Inpatient Recovery Depends Upon Your Honesty

Because Intervention demanded such a large audience from the very beginning, other networks were quick to develop their own addiction programs. With an audience that could only tune in to so many programs, these shows began competing heavily for ratings. The best way to compete was to raise the shock value. This was done by focusing on the most dramatic addictions possible and through creative, sometimes deceptive editing.

In order to honestly evaluate the addiction stories told, audiences must remember:

If you are looking into inpatient rehabilitation and you want to find the best facility for your budget, rather than whatever treatment and center are shown on TV, you need to contact InpatientDrugRehabCenters.com at 800-681-7369Who Answers?. Get the whole truth about treating your addiction.