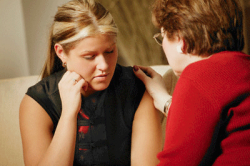 According to the National Institute on Drug Abuse, drug addiction is a chronic and life consuming disease where it is extremely unlikely that a person can stop using drugs for a few days and be cured. In order for an individual to overcome a drug addiction they will most likely have to undergo long-term or repeated episodes of treatment in order for them to remain abstinent.

Depending on the drug abused and the length of time a person has been using, it may be extremely hard for an individual to detox and overcome their drug addiction on their own. Moreover, if the person is having painful withdrawal symptoms they may need to be medically supervised during their detox.

All inpatient drug rehab centers will differ in their therapy tactics, but there are a few therapies that are common treatment methods for drug addiction.

Behavioral Therapy: Behavioral therapy primarily focuses on reconditioning the brain and the person’s behaviors and attitudes regarding drug use.

Group Therapy: Involves bringing together multiple people who are struggling with drug addiction in one room to discuss their problems and hardships with their addiction.

Contingency Management: According to the National Institute on Drug Abuse, contingency management is a form of behavioral therapy that uses positive reinforcement to help a person remain abstinent from drugs.