Are there Inpatient Programs Specifically for Women?

When you go to the doctor, do you prefer a female one? What about your therapist? Would you be more comfortable sharing your secrets and thoughts with a woman? There isn’t anything wrong with that.

Of course, your primary concern would be that the doctor have a great amount of knowledge and a high success rate, but if you could guarantee that and still pick the doctor’s gender, you might go with a female. Women don’t necessarily share a sorority with other women, but the gender does share some characteristics of addiction that separate it from men.

It might feel weird to consider a gender-specific rehab. Why wouldn’t you just go to an all-inclusive one? But, there are actually a lot of reasons to seek out treatment tailored to female patients.

In fact, you can generally tailor your rehabilitation center to your age, your income, and your cultural concerns, so why not gender? After all, on a biological level alone there are differences between men and women and these fundamental differences can lead to differences in treatment.

How do you go about finding a female-only inpatient drug rehab? Contact the helpful experts at InpatientDrugRehabCenters.com. By calling 800-681-7369Who Answers?, you can connect with experts who can tailor your rehab center to your needs. The more geared to you a program is, the better it can help you.

Research on Women and Addiction 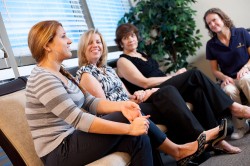 Female-based rehabs focus on the specific issues that often lead to addiction in women.

On a fundamental level, female addiction differs from male addiction. Unfortunately, it has only been since the 70s and 80s that this difference was acknowledged and research attempted to rectify it.

There remain some issues with this, as research from the 70s and even the 80s would not reflect current roles for women. But, regardless of limitations, it is a good thing that the differences began to be addressed.

How Women Differ from Men

After research, patterns emerged. The National Institute on Alcohol Abuse and Alcoholism compiled the following facts about female substance use.

These differences primarily relate to alcohol abuse and addiction, but gender-specific differences exist in substance abuse as well.

One of the roles of female-only inpatient rehabilitation is to address these special needs in treatment and to create a support network of peers who have more that binds them than that separates them.

Issues That Can Be Addressed in Gender-Specific Rehabilitation

Did you know that men are more likely than women to seek traditional rehab? This is in part due to the fact that women face more barriers to treatment. One of these barriers is the perceived stigma associated with addiction.

It tends to be more crushing for women. Instead of seeking help from addiction experts, women go to general and mental health practitioners. A female only rehab center can help reduce that stigma in ways that acknowledge the role it plays, particularly for women.

Women also have life circumstances that can prevent their seeking treatment. Pregnancy and child-rearing stand out as examples. In the 1990s, support from the Federal Substance Abuse and Mental Health Services Administration’s (SAMHSA) Center for Substance Abuse Treatment (CSAT), created residential facilities that allowed mothers to bring their children with them, and many of these centers still exist to serve populations of female parents struggling with substance abuse. Many other programs offer options like babysitting.

If you feel like you would be more likely to seek treatment if your rehab center was female-only, you should give us a call at 800-681-7369Who Answers? to get started today.